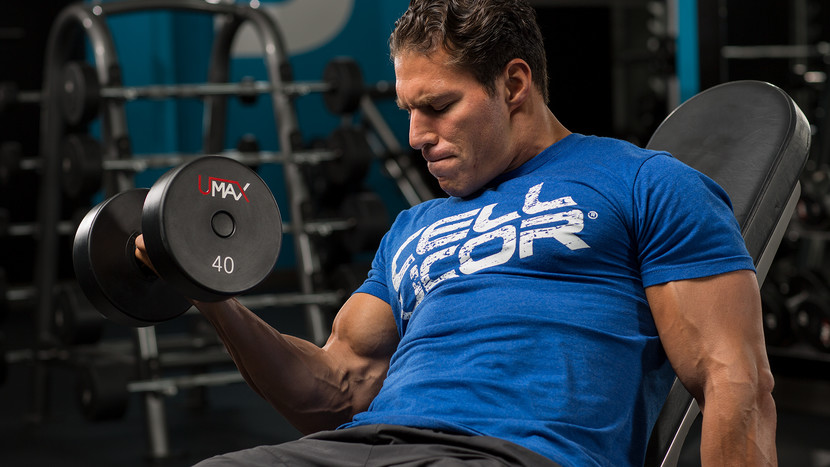 Biceps are one muscle group that you usually don't need a pep talk to get excited about. From the time we were barely out of diapers, we knew exactly what to flex when commanded to "make a muscle."

Whether your inspiration to train was to look like Arnold or to just be the buffest guy at the beach, you know that great biceps are a must. I've heard my share of guys say they didn't care a whole lot about building big quads, backs, or calves, but I've yet to meet any serious weight trainer who didn't covet big, peaked biceps.

IFBB Men's Physique pro Craig Capurso knows what you want, and he knows how to help you get it. Here are his insider tips to help you build guns that make the world tremble at your approach.

1. Don't Work Biceps After Back

Blasphemy, right? After all, one of the most common workout combinations is back and biceps. The reasoning is that since your biceps are involved in nearly all back movements anyway, you should work them in the same session. But, there's also an argument that their importance to back training is exactly why you shouldn't train them together!

Think of it this way: Your big back muscles can manage all those rows, chin-ups, pull-downs, deadlifts, and shrugs. The much smaller bicep muscle, not so much. They get smoked, which means your biceps workout ends up being pretty pathetic. 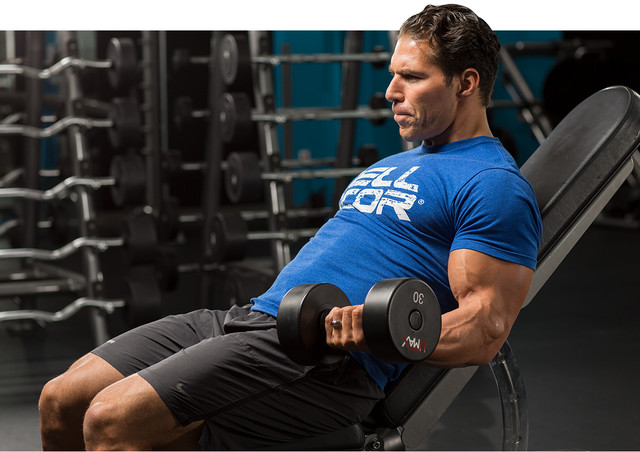 "Small muscles, like biceps, triceps, abs, and calves, are hit in some capacity during your big compound lifts," Capurso says. "So I recommend dedicating two days a week to finish them off on what I call 'auxiliary' workouts. Your CNS is fried when hitting the majors, so by breaking your routine into this split you give yourself a chance to isolate the load and really tune into which muscles you're working."

This is where a stellar biceps and triceps routine like Capurso's Ultimate Arms workout is a no-brainer. You could also be really courageous and work biceps first on chest and shoulder days. Doing biceps first won't detract from your chest or shoulder workouts, and it will allow you to apply the kind of focus and energy to your biceps you may not have done for years.

Lifters who train heavy for strength sometimes get a little bent out of shape when they see people with far more biceps development train lighter and with higher reps. "Pump trainers!" they say with a sneer.

Don't listen to them. Effective biceps training is, has always been, and will always be a quest for the perfect pump. If you're after growth, you need to stimulate your biceps by putting them under tension for an extended period of time. If you've been slaving away on sets of 4-8 and have zilch to show for it, it's because you have to subject your biceps to more time under tension.

I see you nodding, but I also know that deep down, you still feel the call of heavy curls. If that's the case, take the approach Capurso outlines in Ultimate Arms: Start with a heavy 5 sets of 5 reps using the EZ-bar, and then chase the pump like crazy afterward. He calls this "heavy volume."

"Using a heavy-volume approach is my way of having it both ways," says Capurso. "Break down those muscle fibers by adding the right stimulus, and you have a recipe for growth."

3. Make Sure Your Back Training Is Intense

I've known plenty of lifters who focused far more on the bigger muscle groups of the upper body and did little or no direct arm training. Yet because they pushed and pulled insane amounts of weight on bench presses, rows, military presses, and deadlifts, they became huge men with pretty damn big arms, too.

Just because you shouldn't train your biceps after your back, doesn't mean your back training doesn't count as arm training! It definitely does. In fact, a 2013 study found that lat pull-downs resulted in exactly as much biceps growth as lat pull-downs plus curls.[1] The takeaway for you: Slack off on your back training, and you'll miss out on a significant amount of biceps growth.

"The bodyweight chin-up is probably the most underrated biceps exercise in the game," Capurso says. "Put them in throughout your arm or back workout for added stimulation and overload, and you will see bigger pipes staring back at you."

So don't skimp on chin-ups, pull-downs, barbell rows, dumbbell rows, and T-bar rows. Hit them hard enough that you feel them in both the front and back of your body.

Straight-bar curls have a well-deserved reputation for being a great biceps builder, and sure, you look like a badass doing them. But they're definitely not for everybody. When many lifters use the straight bar, they experience moderate-to-severe wrist pain.

Is this just part of the iron game? It shouldn't be. If any exercise causes joint pain on a regular basis, you won't be able to work it to its full effectiveness.

Here's how to know if a straight bar is not for you. Hold your hands out in front of you, and fully supinate them so that your left thumb faces to your left, and your right thumb to your right, with your palms flat and facing the sky. Are you able to do this without any strain in your wrists?

If it takes you a certain amount of effort to put your hands in that position, that strain is going to be amplified with a weighted barbell in your hands. If this sounds like you, stop hitting your head against the wall and switch to an EZ-bar. The bar's cambered shape alleviates wrist strain so you can work your curls harder and start making better gains in your biceps.

While we're on the subject of wrist position, yours may unknowingly be robbing your biceps of gains. Don't worry; the fix takes just a split second.

Do your forearms get pumped when you do any type of curl, often to the point where it becomes so painful you need to stop the set early? You're probably feeling this pain because you're keeping your wrists cocked inward, facing your elbows. This position engages the forearm flexors, which will typically fatigue before the biceps. 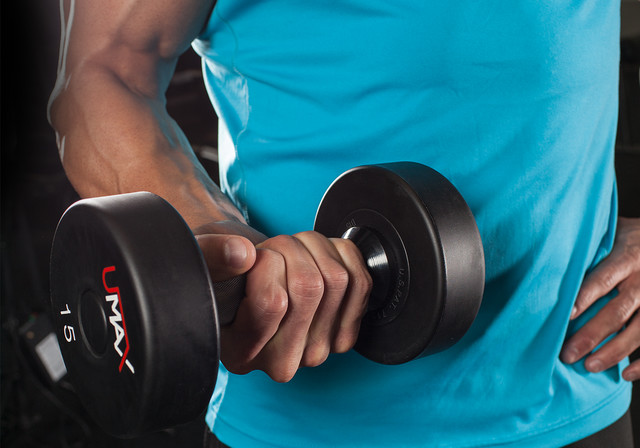 Try a neutral wrist position instead, where your hand is angled neither toward or away from the crook of your elbow. Some lifters find they even need to go the next step and cock their hand back and away from their inner elbow to eliminate forearm-flexor involvement.

Experiment to find the best hand/wrist position for you on curls. If it allows you to get more quality work done with less discomfort, you're on the right track.

You may have been told not let your deltoids take over your curls. But the solution is often not as easy as simply changing our ways. Most of us have such ingrained curl form and such bossy deltoids that we're doomed from the start.

The correction is simple: Take your shoulders out of the movement by bracing your arms on a preacher-curl bench, a spider-curl bench, or even your own inner thigh, as with seated concentration curls. Most curl machines help you isolate your biceps by having your arms locked into place.

So if your delts have been stealing the thunder from your biceps for too long, prioritize curl variations where they're simply not invited.